I can't begin to count the number of security forces and SWAT teams walking around/driving around/encircling all of Denver. Think about that, San Francisco, before you volunteer to host one of these things.

Roads downtown are closed, then opened, and closed down again. The Pepsi Center is encircled by a large "no access to cars" concrete barrier. There are two security checkpoints before you can get inside. You have to open your bags and take out all the metal in your pockets, just like the airport.

Real restaurants and businesses are caught inside the security perimeter. The restaurants are making money because they've turned themselves over to CNN and FOX and other media outlets to be their headquarters.

But the Denver Film Institute is also caught inside the no-go-without-a-pass zone. They've turned their facilities over to STARZ cable channel which is sponsoring a week-long program of political films, panels, and book signings. On a normal week, it'd be a 1 minute walk from the Film Institute at the old brick Tivoli Brewing Co. building to the Pepsi Center. Not this week....but it's still close.

Keep that point in mind regarding this story: On Monday afternoon I attended a panel discussion about U.S. foreign policy with the rise of China, India, and Russia. (Plus Europe) Some of the country's best minds from Harvard and Princeton and former Clinton cabinet officials.

The room was stifling hot!! We thought we were going to faint. An event coordiantor came to the front with a microphone to apologize. "Sorry the air conditioning is out. We have a tech guy trying to get up on the roof to fix the equipment. He's working right now to get his security clearance to be on the rooftop."
Posted by Barbara Tannenbaum at 9:24 AM 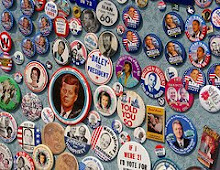